By 1862 the lessor was a Loftus A Tottenham. It seems possible that this was the gentleman of that name who held property in County Leitrim but was married to a daughter and heiress of the Hon. A. Creighton a brother of the then Earl of Erne. He held five other townlands scattered in the Newtownbutler area. This townland while in Aghadrumsee parish is very much on the outer edge of the Killyfole area but it is included because no other townland was divided into so many small lots and it is for that reason that we included all the acreages. Most of the small fields have been absorbed by larger units but there are still some to be seen. The late Robert Creighton who lived in this area all his life said he heard that before the famine there were 22 tenants in the townland including a starch maker and a clog-man. The number of separate holdings in Griffiths exceeds that but the smaller plots were probably bog along the road side.

When Tommy Johnston came to live in Carneyhome in 1958, there was a tiny field, triangular in shape. At best it would only have been big enough for a tiny one room cottage and a bit of garden. There was a trace of where there had been a lane to it. When his father bought this farm from Foster Doonan, this patch was not part of the farm. John Foster and Thomas Higgins in alternate years made a ruck of hay on it. After a few years they sold the field to Tommy. This was the time when the Ministry of Agriculture was encouraging farmers to remove hedges and make fields larger but Tommy never touched this field. This was probably the piece of land owned jointly by Edward Wiggans & Alexander Abraham in the Griffiths Valuation 1862 for Thomas Higgins owned the place that was Abrahams.

By 1901 the occupiers are now down to 7. Foster Doonan has one of the Little farms and then on later bought that of Thos Henry Elliott (probably one of the Foster farms in this list) John McDonald had George Bannin’s and one other (probably the Naan farm) In the 1970’s Jamie McDonald sold his farms to the Johnstons. There was one field he called Paisley’s Hill. There was no Paisley on the Griffith’s Valuation so we tried the Tithe Applotment Book which is roughly 1823-37. There were 16 names altogether. Edw. Little, Wm Little, James Armstrong, Wm. Kennedy, George Little, ?Wiggans, Edw. Wiggans, Alex Abraham, Robert Little, Jas.Little & Jas.Moore, Andrew Forster, John Little, George Bannon, Robert Wiggans and John Peasely! The spelling is different from what we would use to-day but presumably it is the same family. They were gone from Carneyholme by 1862 but Jamie was still using the name to describe a field in the 1970’s. There is no trace of their house but Jamie could point out a fir tree growing beside where it was. On each side of the road there were 7 fields which we think were partly bog originally. In 1958, they were owned as follows: - Creighton, Whiteman, Creighton, Johnston, McDonald, Johnston, McDonald. To make matters more complicated, these were then sliced in two by the road and if that wasn’t enough the fields below the road were again divided by a drain. This caused a few law-suits in days gone by for the sides of the drain would slip down and block the water course and the fields would flood and then the row would rise. There are now five lots of farm land only one of which is an active farm, one part time, the others being either let or out-farms. Of the five houses, only two are on the sites of the original houses, i.e. Griffith and one is a rebuild on a site which was not one of the original houses. Two are on new sites within the last thirty years. 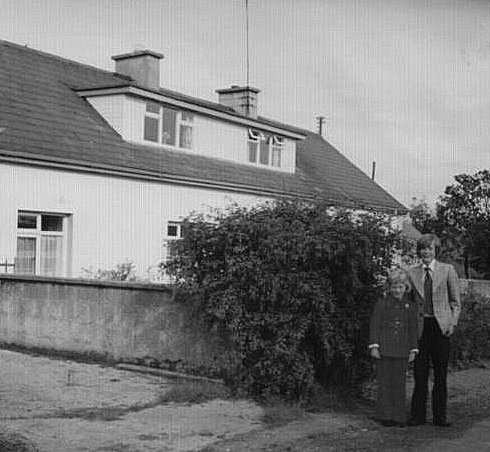 The house in this picture is on the site of the original Little/Doonan/Johnston house on the side of the road. The centre part has the original stone walls and probably was just a room and kitchen with a loft overhead and the door way just behind the fuchsia bush. The end of the house on the left of the picture was a dairy, with a churn worked by a pony or a donkey turning the drive wheel which was on the ground behind where the low wall is. There was a loft over this part with a door in the roof opening unto the hill which was close to the back of the house. This served as a barn loft. Out of sight in the picture there was a stable and byre at right angles to this end of the house. At the other end of the house another room was added in the 1920’s to make a carpenter’s workshop. This room and the dairy were eventually incorporated into the house and part of the hill at the back was cleared away to make a back door and yard. It went through several other renovations before being demolished in the 1980’s when Alex Johnston (in the picture with Veronica) built a new house up on the hill. The oldest part of the present farm-yard is the hay shed built on the other side of the road.