The Diocese of Clogher (Irish: Deoise Chlochair) was formed in 1111 at the Synod of Rathbreasail as the see for the Kingdom of Uí Chremthainn. The Diocese consists of County Monaghan, much of County Fermanagh with parts of Counties Tyrone, and Donegal. It is part of the Archdiocese of Armagh. 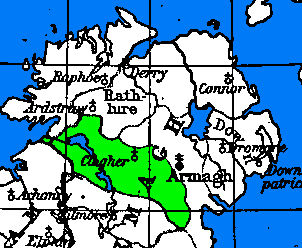 The original cathedral was in the village of Clogher in County Tyrone, site of a monastery founded in 454 by St. Macartan, who was appointed bishop by St. Patrick in the 5th century. Following the Reformation, Clogher Cathedral remained with the Church of Ireland and the Roman Catholic diocese was without a permanent see until 1851 when a decision was made to move to the larger town of Monaghan 32 kilometres south east of Clogher village. The foundation stone of a St Macartan's Cathedral was laid in Monaghan in June 1861. The cathedral was dedicated in August 1892.

Pages in category ‘Diocese of Clogher’

This category contains only the following page.