From FermanaghRoots.com
(Redirected from Cloughagaddy)
Jump to navigation Jump to search

Cloghagaddy is a townland in South-Eastern County Fermanagh, Northern Ireland. May previously be known as 'Barilstown'

Cloghagaddy (Irish: Cloch an Ghadaí) mean “stone of the thief” (only 1 in Ireland)

There is a small church which is known as "Clogh Church" (now in ruins) which suggests that the original name for this townland was Clogh meaning "stone". When Dr P McKay of the Ulster Place Names project came to talk to us, he explained that the more accurate translation would be the "Thief's stone". It is believed that after the incident involving the thief being strangled this townland then became known as Cloghagaddy meaning "the thiefs stone".

Cloghagaddy takes its name from a large stone on the East side where a thief was hanged. The stone is about the height of a man, terminating like a sugar loaf – a man stealing sheep was found hanged. A popular local saying “the sheep hung them over the stone” 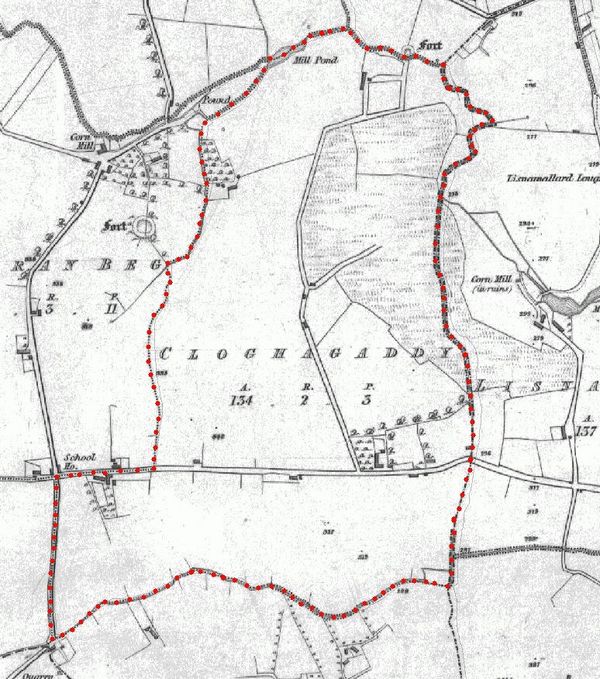 Cloghagaddy isnt mentioned on the 1861 Census. It could be rolled into one of the neighbouring townlands, however, we cant be sure.

This little church no longer exists though the building now used as a farm building is now recognisable from the main road. It closed during the sixties because like many other similar churches there was not the population to support it. This little clip from the Impartial Reporter of 1939 is a reminder of the days when everyone was expected to take his or her part in providing a social gathering.

Local people refer to the 'strand' as being at the cross-roads where the Golan Road meets the Cloghagaddy Road. There used to be a watering hole for cattle on the upper side of the road. When the level of the water rose it used to run across the road as a shallow flow, leaving sand and small stones along the road. In later years this feature was drained by a pipe under the road.

Wikipedia defines a strand as a beach, a geological formation consisting of loose rock particles along the shoreline of a body of water.

In this case the body of water was not very big, but the name has been used for generations to refer to this road junction.