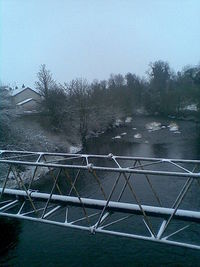 A stretch of the River Colebrooke in Maguiresbridge

The Colebrooke River is a river in County Fermanagh, Northern Ireland. Its source is in the Sliabh Beagh mountains where its known as the Many Burns.

The river flows in a south-westerly direction, through Maguiresbridge, before merging with the Tempo River and finally entering Upper Lough Erne near Inishcollan, Lisnaskea.[1]

The river has abundant large bream, roach, perch, rudd and pike. At the end of the season salmon and trout can be caught as they move from Lough Erne to their spawning grounds in the river's upper reaches.[2][3]

Some of the river is private fishing water on the Colebrooke Park estate.[4][5]