From FermanaghRoots.com
(Redirected from Doon National School)
Jump to navigation Jump to search 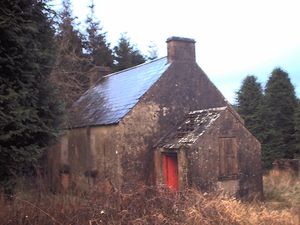 Doon School opened in 1902. The Rev. G. Sullivan who was the rector of Aghadrumsee parish from 1881 to 1914, was responsible for the building of it using funds donated by friends. Before this, the Protestant children had no convenient school. Some of them made the long walk to either Mullinvaum or Corranny schools but by this time these were Roman Catholic schools and while many mixed schools operated quite happily, it would be very simplistic to believe that this was always the case.

Doon was a simple single class-room building but built in a pleasant sheltered location with a generous sized playground, luxuries not always enjoyed by all small schools in those days. The heating was provided by a large grate, the turf for which was provided by the parents.

As far as we know, the first teacher was a Miss Kyle who lodged in Downey’s, the farm nearest to the school. Afterwards a Mrs McCloughry and then a Miss Kerr taught there. During the years Miss Kerr was there the enrolment would have ranged from 20 to 25 pupils, the main family names being Downey, Caldwell, McConkey, Annon, Johnston, Montgomery and McCaulay.

In those days, school life was quiet, or as quiet as it ever is about a school but in the spring and early summer there was much more activity as the farmers from the lowland farms came to the mountain to cut and win the year’s supply of turf as there were extensive bogs in the area around the school. The passing horses and asses made their own contribution to the school garden and it was quite a little break from lessons to be sent to the road with brush and shovel to collect the same.

Miss Kerr was succeeded by Mrs Bryson (afterwards Mrs Clarke) sometime in the late twenties. Throughout the thirties, the enrolment of Doon steadily decreased as the younger people left the mountain farms for work in the towns or further afield. In 1942, the school closed and Mrs Clarke and the remaining children transferred to Aghadrumsee school.

Throughout its life, Doon school served as a focal point for its little community. Concerts and other functions were regularly held and a church service was held by the rector of Aghadrumsee on the third Sunday of every month. During the sixties and seventies the steady decrease of population continued as older people died and younger farmers sold their farms to the Forestry Commission and moved, as they say “inland”. Finally the church services were discontinued and the little building at Doon is left forlorn, with only the silent fir trees for neighbours.