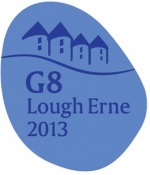 The 39th G8 summit was held on 17–18 June 2013 at the Lough Erne Resort, a five-star hotel and golf resort on the shore of Lough Erne in County Fermanagh, Northern Ireland.[1] It was the sixth G8 summit to be held in the United Kingdom.

The official theme of the summit was tax evasion and transparency. However, the Syrian civil war dominated the discussions. A seven-point plan on Syria was agreed after much debate. Other agreements included a way to automate the sharing of tax information, new rules for mining companies, and a pledge to end payments for kidnap victim releases. The United States and the European Union agreed to begin talks towards a broad trade agreement.

The G6 (Group of Six), started in 1975, was an unofficial forum which brought together the heads of the richest industrialized countries: France, Germany, Italy, Japan, the United Kingdom and the United States. This select few became the Group of Seven starting in 1976 when Canada joined. The Group of Eight was formed with the addition of Russia in 1997.[2] In addition, the President of the European Commission has been formally included in summits since 1981.[3] The summits were not meant to be linked formally with wider international institutions; and in fact, a mild rebellion against the stiff formality of other international meetings was a part of the genesis of cooperation between France's President Giscard d'Estaing and Germany's Chancellor Helmut Schmidt as they conceived the 1st G6 summit of the Group of Six in 1975.[4]

The G8 summits during the twenty-first century have inspired widespread debates, protests and demonstrations; and the two- or three-day event becomes more than the sum of its parts, elevating the participants, the issues and the venue as focal points for activist pressure.[5]

The G8 in Fermanagh

Much to the bemusement of local people, the council decided to fake or 'virtualise' as they call it, some local derelict shops/businesses. The gallery below shows some of the virtual businesses.