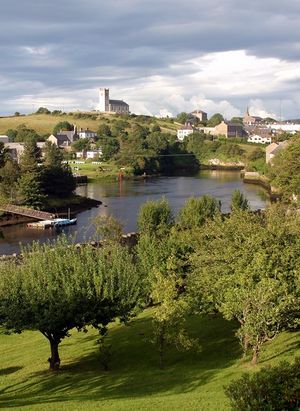 The river Erne in Ballyshannon

The River Erne (Irish: Abhainn na hÉirne or An Éirne), in the northwest of Ireland, rises in Beaghy Lough, two miles south of Stradone in County Cavan and flows 64 miles through Lough Gowna, Lough Oughter and Upper and Lower Lough Erne, County Fermanagh, to the sea at Ballyshannon, County Donegal. For 30 miles from Crossdoney in County Cavan to Enniskillen in County Fermanagh, it is difficult to distinguish the river as it winds its way through interconnected loughs or parts of loughs nestling among the drumlin hills of Cavan and south Fermanagh[1]. The river is 120 kilometres long and is very popular for fly fishing for trout and salmon, with a number of fisheries along both the river itself and its tributaries. The town of Enniskillen is mostly situated on an island in the river, between Upper and Lower Lough Erne. It is linked to the River Shannon by the Shannon-Erne Waterway.

The river takes its name from a mythical princess named Éirne.

The building of hydroelectric power stations at Cliff (near Belleek) and Ballyshannon (work began in 1945 and the first power station was commissioned in 1950) caused famous salmon beats to be flooded and the run of salmon into the Erne has now declined to such a tiny trickle as to be of little angling value except for the few fish that are occasionally caught below Cliff when the power station is generating. Roach first appeared in the river in 1963 and there was a massive increase in the roach population in 1968. This increase could well have had an adverse effect on trout stocks, which went into decline at that time. Water pollution became a major problem in the 1970s and up to 1987. Since 1987 the pollution problem has been well controlled, the roach population has declined dramatically and trout stocks have made a welcome return and provide good angling once more, both on the Erne itself and its tributaries[1].

The River Erne is suited to all types of pleasure craft. It is one of the most popular venues in Europe for rental boat vacations. Live aboard pleasure cruisers are available in many locations along the Erne waterway, including Belturbet, Knockniny, Carrybridge, Bellanaleck, Enniskillen, and Killadeas. In addition to the use of the Erne for live aboard Boating holidays sections of the river are ideal for water skiing, bank fishing, trolling, jet skiing and scuba diving. Boaters are cautioned, by the Original Official Site of the Northern Ireland Tourist Board http://www.geographia.com/northern-ireland/ukifer01.htm , that Upper Lough Erne is a maze of small islands needing careful navigation and waves on Lower Lough Erne can reach “open-sea dimensions”. It is believed that in 2009 Donald Attig, at 73 years of age, established benchmark records in both endurance challenge and adventure challenge categories as the first person to complete a single handed transit of the entire Erne Navigation in an engineless live aboard pleasure boat. After an official launch by Her Excellency Priscilla Jenna, the ambassador from South Africa, Attig started his engineless transit at the end of navigation marker at Belturbet, County Cavan. He completed the engineless transit at the end of navigation marker Belleek, County Fremanagh. Previously, in 2007, Mr. Attig and Jack Donovan established similar records by being the first crew to complete a transit of the River Shannon Navigation and beyond in an engineless live aboard pleasure boat. In 2008 Donald Attig repeated the 2007 feat single handed.

The Erne waterway is virtually littered with Ancient ruins both Christian and Pagan. The sum total comprises a treasure trove for the photographer, historian or anyone interested in Ireland’s roots. Significant ruins can be found at the following locations. Crom Estate, on the North bank of the Upper Erne channel, Gad Island, near Crom Estate, Devenish Island, Inismacsaint Island, Davy’s Island, White Island, and Boa Island. Many of these locations can only be reached by boat. Boa Island is the home of one of most interesting pre-Christian statues in Ireland and Inismacsaint has, what is reputed to be, the oldest large stone cross in Ireland. Devenish Island has an excellent historical display centre, adjacent to its most interesting ruins. Rental boats and hire boats abound on the Erne Waterway. There are also some excursion boats servicing the Erne Waterway. The Ordnance Survey of Northern Ireland Activity Map of Lough Erne(Isbn 978-1-905306-26-8) is an excellent source for planning your photographic, boating, or historical research trip to Lough Erne.

The song "Buachaill Ón Éirne" is a famous Irish ballad about a young boy from the Erne area. It has been recorded by such groups as Clannad and The Corrs.