Clones (Template:Pron-en, Irish: Cluain Eois) is a small town in western County Monaghan, in the 'border area' of the Republic of Ireland. The area is part of the Border Region, earmarked for economic development by the Irish Government due to its currently below average economic situation. The town was particularly badly hit economically by the partition of Ireland in 1921 because of its location on the border with County Fermanagh in Northern Ireland which deprived it of access to a large part of its economic hinterland, now situated on the other side of the border. The town had a population of 2,889 (including the rural area) at the 2006 census. The town's name in Irish, Cluain Eois, means 'Eos's meadow'. However, it is also said that the ancient name was Cluan Innis, "the Island of Retreat," it having formerly been nearly surrounded by water. 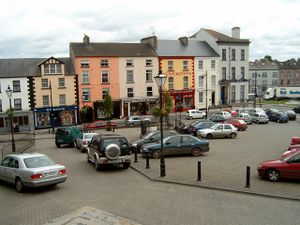 Clones was the site of a monastic settlement in the kingdom of Dartraige Con-innsi, originally founded by Tigernach (anglicised Tierney) in the 6th century, until the dissolution of the monasteries by Henry VIII. St. Tigernach or Tierney's abbey, built in the early 6th century was dedicated to St. Peter and St. Paul. Tigernach later became Bishop of Clogher and removed that see to Clones, where he died of the plague in 550. The abbot was the Primus Abbas, or first mitred abbot of Ireland. In 836, the abbey was burnt; and in 929, Ceanfoile, coharb of Clones and Clogher, died here. The abbey was destroyed by fire in 1095, and, in 1184, the abbot Gilla Christ O'Macturan was elected Bishop of Clogher. In 1207, Hugh de Lacy destroyed the abbey and town; but five years after they were rebuilt by the English, who also erected a castle here.

In 1316, and again in 1504, the abbot of Clones was elected Bishop of Clogher. The ruins of a 12th century abbey building can still be found in the town, along with a sarcophagus reputed to have been built to house the remains of Saint Tighearnach, and a 9th century round tower and high cross.

In February 1922, just after the partition of Ireland, Clones was the scene of a confrontation between the Ulster Special Constabulary and the Irish Republican Army. The Special Constabulary were a temporary, armed police force raised in Northern Ireland to put down IRA guerrillas there. Since the end of the Irish War of Independence in July 1921, the IRA were acting as the de facto army of the Provisional Government of the Irish Free State. A unit of Special Constabulary was travelling by train to Belfast, but was stopped by an IRA unit at Clones, in Southern Ireland, while they were changing trains. The IRA men demanded that they surrender and a gun battle broke out. An IRA officer was killed, as were four Special Constables. Nine other USC men were injured and the rest surrendered. The incident, known as the 'Clones Affray' at the time, threatened to cause the collapse of the Anglo-Irish Treaty and prompted the British government to suspend the withdrawal of British troops from the Free State.

The town was a major Great Northern Railway (Ireland) Railway junction during the 19th and early 20th centuries, where routes from Enniskillen, Armagh, Cavan, and Dundalk converged. This formed the focal point of the railway network in what is now the border area between the Republic and Northern Ireland. The railways were finally closed after unilateral closure of the Northern Ireland route sections by the Northern Authorities and the Ulster Transport Authority (see History of rail transport in Ireland). Clones railway station was opened on 26 June 1858, closed for passenger traffic on 14 October 1957, and finally closed altogether on 1 January 1960.[1]

Clones is now mainly known in Ireland as being the location of the GAA stadium, St. Tiernach's Park. This stadium is regularly used for inter-county matches during the Ulster provincial championship in Gaelic football, and traditionally hosts the final. The summer football season is therefore a major source of revenue for businesses in the town.

The Flat Lake Festival is an annual event hosted by Kevin Allen (actor) in Hilton Park, Clones, Co. Monaghan since its inception in 2007. Readings, comedy, music and theatre takes place within the farm estate among the barns and bales of hay, abandoned tractors and ancient oaks of Hilton Park over the period of a long weekend, just a couple of miles outside the town of Clones on the back road to Cavan town. The festival is non-stop fun night and day. In previous years it has taken place in mid-August. In 2010 the Festival will take place over the June bank holiday weekend. [1]