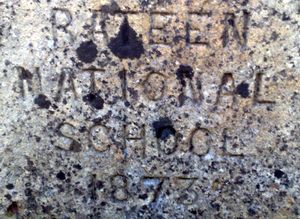 Rateen National School was built in 1873. The building takes its name from the townland of Rateen in which it is located. Although it was a nice cut stone building was, to quote one ex-pupil “built on the worst site in Ireland. It was built in a wet, ould hole!" It was a one-room building with the teachers at opposite ends of the room. The children sat on long form-like desks in which there were some ink wells. The pupils were tightly packed into these forms. The young children wrote with chalk on slates. The walls were very damp and the building had one big fire in the middle of a side wall. They burned mainly turf and parents took turns to bring a load of turf which was stored in a room off the porch. This porch was the only shelter for the children on wet days. It had a playground outside the main building which was surrounded by a stone wall. However, this playground was nearly always flooded so the children played mostly on the road. A stone lorry and a couple of cars was all the traffic at that time. The children crossed the road and played up Rateen lane where there were two deep drains up each side. Jumping the drains was a great game but there were several times when someone nearly drowned.” Among the teachers were Master Quinn, Mrs Mulligan and and Mrs McGrory. Mrs Mulligan was, to put it in milder language than some of her ex-pupils used, over-fond of using the stick. Since her husband cut the sticks out of the hedge for her, some of them were hefty cudgels. In the mid 1930s, the enrolment was about 18 Protestants, 20 Roman Catholics and many of the parents were unhappy about the level of corporal punishment and the whole atmosphere of the school.

The remains can be recognised on the left hand side of the road to Roslea.