From FermanaghRoots.com
(Redirected from Magheraveeley)
Jump to navigation Jump to search

Magheraveely is a small village in County Fermanagh. In the 2006 Census it had a population of people 254. It is worth noting that local people sometime spell with an extra 'e' for example Magheraveeley. The hamlet of Magheraveely is in the townland of Uttony 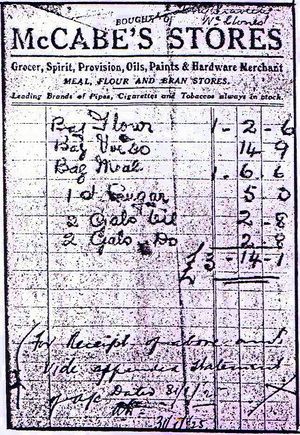 In 1820, Magheraveely used to lie on the main road to Dublin (Lisnaskea, Ballagh Cross, Magheraveely). It was once a busy business hub for the local community.

In 1841 the population was 74. Petty sessions were held in Magheraveely before the Courthouse in Newtownbutler was built.

In the 1920's the post office was located where Sean and Peggie McCabe now live. It was run by Mrs Celia Caroll and her brother Willie Blakely who was the postman. He lived where the new houses have been built today. The postal address was Magheraveely, Clones. In later years, 1930's, Willie had a barders shop in the village.

William Armstrong was a shoe maker had his business where Sean and Mary McKiernan now live.

When John McCabe came to Magheraveely in 1921 and he bought the pub (Now Oasis Bar), he also opened a grocers shop and hardware store. He passed away in 1960.

In later years, Willie and Maureen Kennedy had a grocers shop and at one point the village of Magheraveely had 3 different grocery stores!

There was also a saw-mill just outside the village.

Where McConkeys Shop is now there used to be a forge owned by Bob Coulter. The blacksmith was Bob West who later started his own forge out the Newtownbutler Road.

In 2015 the Magheraveely Community Development Association (MCDA) regrouped and got straight to work organising a vintage and modern tractor run, along with a family fun day which was followed by a BBQ and live music in the Oasis Bar and Lounge. The event was extremely successful and the group continues to organise events and offer opportunities for the local area. For more information on the group, please visit the website Magheraveely.com

There used to be an old school in the townland of Midhill called 'Magheraveeley National School' or known by locals as 'Midhill Country School'.